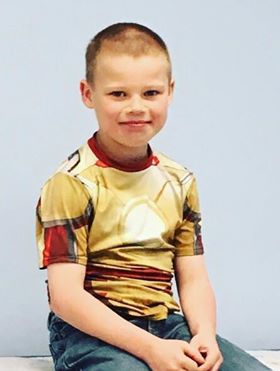 I will never forget the day that my family doctor came into the room and explained to me that our unborn child had a severe heart defect called Hypoplastic Left Heart Syndrome. They were the most shocking words I have ever heard.
Jace came into the world at 6lbs and 12oz screaming his little lungs out. The room of course was filled with doctors and nurses. I was able to hold our little miracle for about 2 minutes before he was whisked away to the Saskatoon NICU. The next time I saw him I was taken aback.

I couldn’t have prepared myself enough to see my fresh little baby filled with wires and medical equipment.

On day 5 we were air lifted to the Stollery in Edmonton where we were introduced to our new medical family who would be caring for Jace. At 8 days old Jace entered the Operating Room where he underwent his 1st open heart surgery called the Norwood. The wait while he was in that operating room felt like days. Finally our pager went off and the surgeon (our hero) came out and told us that everything went well.
The next week Jace soared through recovery and we were once again able to hold our new son – The best moment of our lives. We were then transferred back to Saskatoon to finish out Jace’s recovery. 2 weeks later we were on our way home.
We tried to live the next few months as a “normal” family would, with limitations of course.
Then, at 5 months old, we were on our way back to Edmonton for Jace’s second surgery called the Glenn. Jace was a trooper and once again soared through the surgery and recovery!! 5 days in Edmonton and we were on our way home.
After the Glenn we were able to really and truly bond with our little man and have a normal two and a half years with him. The whole time knowing in the back of our heads we would one day soon be heading back to once again hand over our baby to the hands of our hero’s in the operating room.
Jace, now about to celebrate his 3rd birthday, was called in for his Cardiac Catheterization. The Cardiologists all decided that his time was nearing. So, on May 28th, just 7 days after his 3rd birthday, we returned for Jace’s 3rd open heart surgery called the Fontan. This one was a tough one for his momma especially as I had finally let my guard down and bonded very, very deeply with this little man of mine that was just full of energy and life.
The moment that he and his daddy were wheeled away and headed to that OR tore me into a 1000 pieces. All I could do was pray. Again, the wait felt like forever. Our surgeon emerged and told us that everything went well and that we could soon see him. We entered into the PICU and once again saw our son fighting with all the strength he had. Jace’s recovery in PICU went well and we were soon transferred to the Ward.
Here is when things went a little down hill:
As Jace came to a little more he had no desire to do much of anything which was very unlike him. One day I was trying to make him smile so I threw some cheese up in the air and tried to catch it in my mouth. When Jace finally showed me that smile of his I noticed that something was wrong.

Jace had had a stroke.

I called in our nurse and she took it from there. After a night of tests and doctors it was confirmed that our baby boy had in fact suffered a major right sided stroke. This was, of course, devastating. Jace lost most of the use of the left side of his body. The doctors and physiotherapist told us that we were looking at a possible 6 months of inpatient therapy at the Glenrose therapy centre in Edmonton. To our disbelief Jace beat everyone’s expectations and began to bring his little body back to life.
After 2 months we were again on our way home. Jace was fully recovered  physically from the stroke after 6 months of therapy. It was indeed a miracle!!
Jace has fought battle after battle but has remained a kid that nothing can keep down. He is so full of energy and light that it’s infectious. Jace received a 2nd and 3rd place ribbon at last years track and field, and received player of the game in his hockey season this year. He loves just about any sport that can keep him with his friends. Jace is now 9 years old and going strong with that little half heart of his. And we couldn’t be more proud!

One thought on “Jace’s Fight”